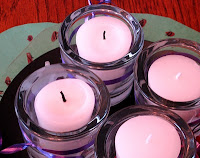 How hard is it to find Peace in this busy Advent Season?

Over the weekend, I went out to brave the cold, the snow and yes, the other busy holiday shoppers.  See we have two birthdays in December, St. Nick's as well as Christmas.  It's a busy month, and an expensive one.  For the most part, store clerks were happy and helpful, the customers were polite and easy going.  And I know why.  It's only Dec 6th.

As Christmas gets closer, I know things will change.  They always do.  I'd like to hope that there won't be angry shoppers, impatient drivers, or cranky sales people, but I am usually a Christmas Procrastinator.  I leave things to the end, and cram it all in the week before.   And that's exactly when I have seen all the Christmas crankiness.  There's pressure, I get it, for everyone to get a million things done, parties attended, presents wrapped and so on.

For me, this year, I said 'good-bye' to that exact pressure.  Determined to keep a bit of inner peace, I organized a bit better this year.  Made out my lists, picked up my items, and I really only have two people left, who are very difficult to figure out.

I've kept my Peace.  So far, anyway. But let's go a bit further....how does Christ's coming help keep that precious, fragile peace within?

I personally have a way to let His peace find me, especially in difficult moments.  Over the weekend, I was in a parking lot traffic jam.  Five lanes of cars were trying to merge into one lane to then exit the parking lot.  Cars coming into the lot were stuck since no one in any of these five lanes were giving in, or at least they couldn't as they each had four or five cars behind them.

Then I looked directly into a tall SUV coming my way hoping to cut in front and enter the lot.  I met eye to eye with a middle aged woman, dark hair with a bright scarf.  I motioned with my arms, to get a reaction of which way she wanted to go.  She then motioned that she wanted to cut across me.  I looked behind me, there was no one.  No cars had made a lane behind me, and so I did what I could to ease the flow of traffic.  I put the stick into reverse, and moved.  That's it.  No magic here, just moved back about three feet.  And she was able to cut over, and her wave of thanks made the effort worth it.

I waved back, moved forward those three feet, and quickly was out of the parking lot and on my way.

It's moments like this that give me peace.  No matter what all those other cars were feeling: aggrevated with the feeling of being trapped, I was able to do something about it.  I looked behind me, I had a solution, and I did something with it.  It wasn't much, but it got one lady in a super tall SUV to where she wanted to go.  I helped one person.  That's all, sometimes, we need to do.  Just start with one.

You'll be amazed at the sense of peace and fullment you'll feel and find there....and that's His peace, that's Christ's peace:  one who graciously moves aside to help one other person is in His peace, there's a calm there, a trusting, a willingness to suffer for a stranger.

Let us, in this Advent week dedicated to Peace, be that Peace for others.  Let us bring His calm, His grace, His understanding and compassion.  Let us set ourselves aside, and simply do something small.  Even three feet small will do the trick.  I promise you.