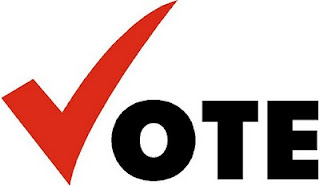 Election Day:  The opportunity to once again let our voices be heard by those who mean to lead us.

I know, I know, sometimes, it feels like, it's only one vote, my vote.  Will it make a difference?

Today, I planned to go vote with Babe while the kiddos were at school, and we just didn't get to it.  I managed to finish laundry and make a delicious coffee cake for HH, and I just didn't have the energy to load up and drive over.

Then HH came home.  Honestly, I can say, that I really do value him, even when he is kicking me out the door before the polls close.  I actually asked him, "What was the point, as the country seems so unhappy, that my one vote will probably not make the difference."

His answer was enough to brave the cold, dark roads to our local polling place and fill in those dark circles.  He said, "That's not the point.  It's our duty."

I thought about that word on my drive to vote, "DUTY."  What does that mean anyway.  Is it my "duty" to go out on a cold night, forsake a goodnight kiss to my littlest ones when HH puts them to bed?  Is it my "duty" to cast my vote while my one vote isn't the deciding factor?

As I drove up and parked, I began to grumble under my breath, pretending to keep my chin warm by tucking it into my coat.  "Duty.  It's my duty?"

I walked into our polling place (which interestingly enough was a Catholic Church!) to which I was greeted by the MOST patriotically dressed woman I have ever seen.  She had a white shirt on with hundreds of little American flags on it.  She wore several buttons in support of our US of A, as well as coordinating bracelets of red, white and blue, earrings to match, and something in her hair of these very colors that I just can't name, as I didn't want to stare to figure out what it actually was.

I thanked her for her assistance, got my ballot and into the tiny cubicle I ventured.....

I stood there for a good minute and said a little "thank you" to God.  Here I am in a Catholic Church, grumbling about my "duty", when out of nowhere, this woman, truly showed me what it means to be an American, and proud of our country.

Not all countries allow their citizens to vote, and there are still parts of the world where women can't vote....(I looked it up, thanks wikipedia!)

Women's suffrage (the rights to vote) denied or conditioned

* Bhutan - One vote per house. Although this applies to both men and women, in practice it currently prevents many more women from voting than men. If the new proposed constitution is voted and ratified, then no restrictions will apply by 2008.

* Lebanon - Partial suffrage. Proof of elementary education is required for women but not for men. Voting is compulsory for men but optional for women.


* Brunei - No suffrage for women. Neither men nor women have had the right to vote or to stand for election since 1962 because the country is governed by an absolute monarchy. (see note)


* Saudi Arabia - No suffrage for women. The first local elections ever held in the country occurred in 2005. Women were not given the right to vote or to stand for election.


* United Arab Emirates - Limited, but will be fully expanded by 2010.

* Vatican City - No suffrage for women; while most men in the Vatican also lack the vote, all persons with suffrage in Papal conclaves (the Cardinals) are male

Before I filled in my little black circles, I felt that slight tinge of being ashamed.  I begrudgingly drove out to vote.  I wasn't proud.  I wasn't glad to be an American with this right of ours to vote.  I am a busy Mom, with things to do, kids to put to bed, dishes to clean, homework to check and all the rest of the duties of a typical day.  After seeing this "dressed to the nines" assistant at the polling place, I was reminded what a great country we truly do live in, and I am glad for her, whatever her name is.  She brought me just what I needed at the exact moment I needed it.

I placed my ballot into the slotted machine, saw the digits on the screen go up just one.  Just one number.  My number, my vote was cast.  As I walked out of that church, back to my van, I didn't bury my chin into my coat muttering some nonsense, I walked, head held high.  Sometimes we all need a swift kick in the pants either by my husband, or this little unassuming, Red, White and Blue staffer.